In a previous life, this was penned for Beaut.ie (full article here) while I was pregnant with number 2. Having witnessed a poor wagon trying to surreptitiously hurl into a bin on the way to the Dart a few days ago, the article is probably worth regurgitating (apologies).

Obviously, these are only suggestions that helped me; every pregnancy is different. We’ll kick off with a very obvious one.

Wear Glasses? Remember to Remove Them: I’ve lost count of a number of times I’ve leaned out of the car, over a basin, or the toilet only to have my glasses fall off my face and plop into a new warm pool of spew. On the upside, if they don’t slip from your ears, they do create a handy eye-guard from toilet bowl backsplash.

Ice Ice Baby: The high levels of hormones produced in early pregnancy relax the muscles throughout your body – including your digestive system. One of the few things that momentarily satiate that constant burning sensation in the belly/chest is ice pops. Mr. Freeze was my very best friend from weeks 9 – 14. Obviously, a healthier variation would be freezing fruit juices or homemade smoothies but I just didn’t have the energy for that. A lot of women find drinking water makes them sick, so ice cubes or lollies are a good alternative.

Protein is Your Friend: Carbs may be your first port of call at this time, but they’re not going to fill that endless void in your stomach. If you said this to me 2 months ago, the response would’ve been, “Pfffft, bugger off and leave me and my cheese toastie in peace.” That’s fair enough, but if you can get a chicken breast, a boiled egg or a bean burger into you, you’ll be “satisfied” for longer. 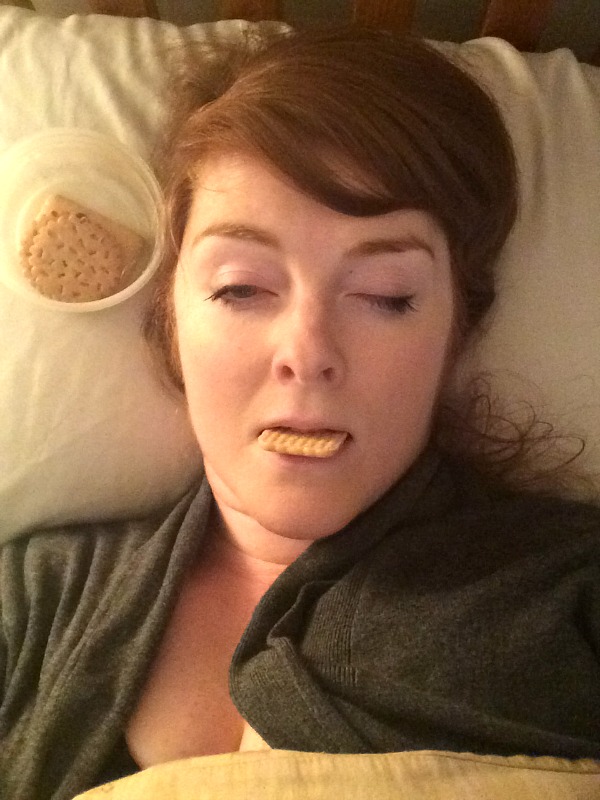 Biscuits in Bed: The only thing that gets me out of the scratcher in the morning/after a nap. Try nibbling a plain bickie 15 minutes before you even attempt sitting up.

Eat Eight Small Meals a Day: Yep, eight. Eating little and often is key to keeping the belly constantly full and therefore not as sick. The downside is if the repertoire of foods you feel like eating is very small, you’re going to be (literally) sick of your options after a week.

Try Breathe Through It: I was averaging out at two vomits a day, and now down to two a week. When the heaving starts, and the stomach contracts, I stop whatever I’m doing, close the eyes and take three deep breaths until the wave crashes (something I learned thanks to horrific hangovers of yore. Every cloud). The reasons are twofold – 1) vomiting more than twice a day while pregnant can lead to dehydration and therefore a potential trip to hospital. 2) There’s no bloody way I’m losing one of the meals I forced down if it can be avoided.

That MANKY Taste in The Mouth: You could carry mints, or brush your teeth constantly (which can also lead to gagging). Nothing really gets rid of the perennial rankness of pregnancy breath. It’s not the metallic one, it’s the ‘wet badger nestled at the back of the tongue’ one. The only thing that works for me is a mouth spray that never leaves my pocket.

Always Carry a 9 Bar: Never leave the house without a snack. It could be some dried fruit and nuts, a packet of crackers, or a granola bar… fumbling for a mouthful of the Sunflower Seed 9 Bar is the only thing that saved me from heaving in public.

Carry Around Zip Lock Bags: The large ones. Not the little sandwich ones. If you do have to heave in public, better spewing into one of these than soiling your handbag.

Really, the only thing that can shift the seedy feeling of morning sickness is time. That is little solace to someone who’s feeling entrenched in week three of a potentially a 10-week hangover from hell. For some, it lasts the full nine months.

You will get through it, grinding and isolating as it can be. If you feel at the end of your tether, don’t suffer in silence, go to your doctor – they should be able to help.

If you know of anything that’s helped with the dreaded morning sickness, please do share below!