HIS FIRST BIRTHDAY would have been around March 7th, 2016. We’ve no idea if it was a boy or not, I just had a feeling.

My miscarriage was one of the more traumatic experiences of life so far, and easily the most solitary.

People are adept enough at checking in after the death of a parent, or in the wake of a hospitalisation, or any another arduous life event, but it’s rare someone will open with a chat about your miscarriage.

Having written about the ins and outs of miscarrying at 11 weeks many times, you’d think I’d be “over it” by now, right?

“That was 2015! Sure, haven’t you had another baby since?!” For the record, that’s just my unhelpful internal voice talking – but it’s not an uncommon sentiment.

Miscarriage is a considerable experience, often there’s a feeling you should be sweeping your experience – and your feelings about it – under the carpet in record time so you can return to work as if nothing’s happened.

If someone in your life has been through a miscarriage, there are definitely ways to support them and be there for them. There are many helpful things you can say. And there are also many, many things you probably shouldn’t say.

1. ‘At least you weren’t further along…’
That doozy was uttered by a midwife in hospital, who added, ‘I’ve had countless women in here give birth to stillborns.’ No doubt she had, and that is beyond horrific, but negating someone’s feelings by throwing in other people’s experiences is counterproductive. They aren’t comparable on any level. Thankfully, there were other midwives who went above and beyond. One just sat on the bed and hugged me, which was everything at the time.

2. ‘At least you know you can get pregnant. There’s always next time!’
At least let me and the family get something of a handle on this experience first! This kind of statement opens up a Pandora’s Box of “What ifs…?!” which are also counterproductive.

3. ‘Well, you have a child already, there are plenty who don’t…’
We are aware, thank you. Said child also keeps asking us for a sibling, so perhaps you can help us explain that to her while I quietly sob in the corner.

4. ‘You must be absolutely devastated, are you?’
At that precise moment in time, your friend could be just really happy to see you. So, instead of projecting on to them, just ask them how they’re doing.

5. ‘You’ll get through this…’
Sorry, lads, it’s not about ‘getting through it’ or ‘getting over it’, that is nigh impossible. It is a significant physical and emotional trauma. Consider grief a sack of rocks you pick up every day as you haul yourself out of bed. Now you carry it around with you for the day… It’s heavy. It’s tiring. It’s endless. But you and your body can learn to deal with it. How? By lightening the load. If you’re afraid of the tears coming and never stopping, it will. Try not to fear the feelings; letting them wash over you is freeing in the long run. 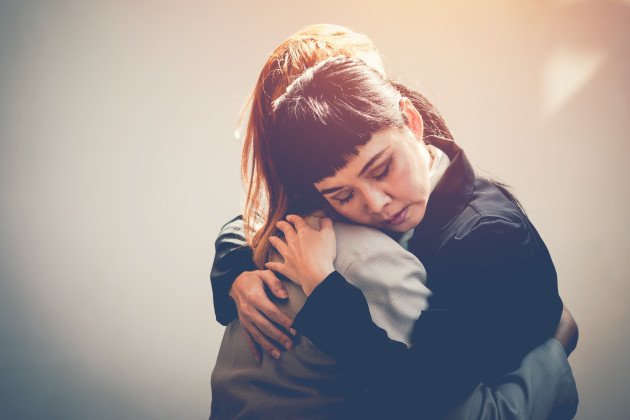 So, what to say instead? Try one of these…

1. ‘I’m taking the kids for a couple of hours’
This is obviously a personal favourite. If you already have kids, trying to be there for them without crying or flying into a rage spiral can be exhausting. Having just a couple of hours where you don’t have to be OK is always appreciated

2. ‘How do you feel about Mother’s Day/your nephew’s christening/ your sister-in-law’s baby shower?’
Everyone is human. Days like these can bring up emotions so and it’s okay not to feel okay on these days. Remind your friend or loved one that what they are feeling is par for the course – and of course, if they don’t want to attend said event, they don’t have to.

3. ‘What happened is normal, and what you are feeling is normal too.’
While that statement may sound crass, miscarriages are indeed normal. My sister, who had also suffered a miscarriage around 11 weeks, called around after we got the news. She said her doctor helped enormously when he matter of factly said “It’s like a zip. Sometimes it zips up no problem, other times, the zipper teeth misalign.” In short, there was nothing she, or anyone, could have done about it. It is also normal to feel numb, overwhelmed, jealous, lost and more. One day at a time.

4. ‘How would you like to remember them?’
Christmas, due dates, would be birthdays, they can all be tough times. You can pay tribute in all kinds of ways – if you want to. My husband always suggests visiting my parent’s graveside. It’s never something I want to do. Why stand over a grave when you can dance to one of their favourite songs that just happens to come on the radio? By way of remembering our little one, I got a teeny pendant necklace with a baby foot engraved. Some may consider that overkill, but if it makes you feel better and it’s not hurting anyone else, then where’s the harm?

5. Sometimes, there’s no room for words
Listen, no one knows the right thing to say. At times, there are no words that can do an experience justice. There are other ways, however. Hugs. Housework. More hugs. A voucher for somewhere. A thoughtful card. A little painting. And even more hugs.

Bottom line: Never stop asking how they are – the same goes for their partner. It’s incredibly important to normalise grief in all its forms.

AIMS: Association for Improvements in the Maternity Services