Words like “no” and “don’t” are often used as a kind of parenting shorthand. It’s a quick way to say, “I’d really rather you didn’t do that” or “What you’re doing is extremely unsafe, please stop immediately.”

But for a young child, those words are more likely to be interpreted as “I’m angry for reasons that are unclear.”

Overuse of the word “no” to a large percentage of your child’s actions or requests can lead to confusion, frustration, and upset. While young kids do need boundaries, they also need to know why they shouldn’t do or have something.

Frequency comes into the equation too. When you say a word like “no” too often, it loses its power. Yes, it’s direct and covers an array of scenarios, but before long your favourite phrase will morph into white noise. It won’t have the same level of gravitas. So, save it for those emergency moments when you really want your kids to stop what they’re doing, and fast.

As for the remaining scenarios; below are ten alternatives to the word “no” that I employ (pretty successfully) at home.

1. “What happened the last time you…?”
Instead of saying “no”, ask a question instead. It will make them think. For example, my eldest had a habit of swinging on her chair at dinner time. Repeated refrains of “No swinging on your chair, you’ll hurt yourself!” fell on deaf ears – and she fell off her chair. She needed to experience the fall to know she didn’t want a repeat incident. Now, when she absentmindedly swings on the chair, it only takes a “What happened the last time you did that?” for the swinging to instantly stop.

2. “Are you looking forward to your treat?”
This one is generally deployed when the kids are messing at mealtimes. Picture the scene: the three-year-old is lying on the floor making dirt angels, while her older sister is using a fork as a microphone. Instead of roaring “No more messing”, they’re reminded that a couple of jellies are up for grabs once they’ve eaten their dinner. Yes, sugar is the devil, but sometimes you need to pick your battles.

3. “It’s your choice, so choose wisely!”
Last week, my youngest refused to wear a hat on our excursion to the park, so I outlined things as follows: “You can put the hat on, or we’ll just visit the playground when it’s warmer in May – it’s your choice!” In this situation, your child has effectively been given options and will usually go with the easiest. If they start moaning about the outcome, this mantra is handy: “That was your choice; we live with our choices. Maybe you’ll choose differently next time.” 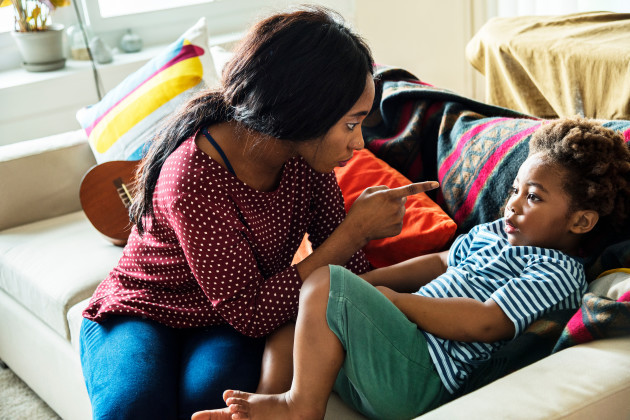 4. “We only do/say that at home.”
To be blunt, myself and the husband swear like sailors, spouting streams of expletives when particularly frustrated. Of course, the kids pick up on it, and repeat ad nauseam. We couldn’t possibly say “Don’t use that word” or “No potty mouths!” because A) that would be hypocritical, and B) it empowers the word. Instead, we say “That’s just something mummy says when she’s frustrated in the house. If you said that outside, or in school, you’d be in trouble.”

5. “Gently does it.”
We have a half-feral cat who, to be fair to her, takes manhandling in a good-natured fashion. There are limits, however. Swap a reactionary “NO tail pulling, she’ll scratch yer face off!” with “Gently now, cats can scratch.”

6. “Maybe later…”
This is uttered approximately every four minutes in my house. You’re not saying no, but you’re not saying yes. In years to come your child will cop that they’re being fobbed off but, in the meantime, it will give you some peace.

7. “I’m trying to understand. Breathe. Now use your words.”
Reserved for when the whinge-o-meter has reached somewhere between “inflated bagpipe” and “stray cat.” Let’s be honest, you understand what they want, but the whinging needs to end. The breathing will calm them, and then – once they’ve used their words – you can say “maybe later.”

8. “I’ll be back once you’ve calmed down.”
The child has reached DEFCON-2 levels of apoplectic. There is no reasoning with this little enraged human. If you’re at home, or in someone’s house, bring them to a safe place and tell them “You’re angry, but the screaming is too loud. Let the screams out in here and I’ll be back when you’re calmer.” Return in two minutes, irrespective as to whether the screaming has ceased. Usually, my child will keep up the tantrum until I knock on the door and say “It doesn’t sound like you’re calmer. Do you need a bit longer?” She will always say she doesn’t. It’s her reset button.

9. “Listen! What’s that noise… Can you hear it?”
This works on an array of levels, as a last resort. I use it when we’re in a public place and there’s no bedroom for her to scream in. The “noise” in question is clearly your child caterwauling, but asking them to listen up will usually quieten them down – just enough to ensure the “noise” isn’t a nearby ice cream van. The moment of silence is usually followed by some calmness.

While it takes time, effort, and infinite energy to be relentlessly creative with your responses, you will reap the long-term rewards. Then, when you do utter a hard “NO”, your warning will have exactly the impact you need it to.